Expand fiber capacity with additional wavelengths that transport up to 10G each with iConverter CWDM Multiplexers.

iConverter copper-to-fiber media converter modules and fiber-to-fiber transponders with CWDM Small Form Pluggable Transceivers (SFP) are installed in a high-density 19-module chassis. The traffic from external T1/E1, T3/E3/DS3 and Fast Ethernet sources is converted from copper-to-fiber with media converters and CWDM SFPs. The Gigabit Ethernet traffic from the fiber switch is converted from a standard 1310 wavelength to a CWDM wavelength with an iConverter xFF transponder. 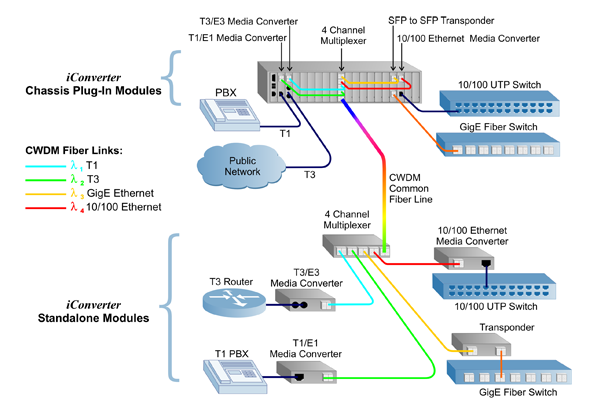 At the opposite end of the common CWDM link, a 4-Channel CWDM MUX demultiplexes the four services, and fiber links connect to each destination device in one or more locations. iConverter standalone media converters with CWDM SFPs provide media conversion and wavelength conversion for connectivity to the existing network equipment.

This application illustrates that data from virtually any type of communications equipment can be carried over a CWDM network with the iConverter Multi-Service Platform.

These modules can be integrated in a variety of chassis configurations to create a flexible and scalable multi-service platform capable of delivering Ethernet, TDM and other services over existing fiber networks.

Learn more about CWDM Multiplexing at the CWDM Resource Center

This application demonstrates how a simple point-to-point fiber link can be upgraded to a multi-protocol, multi-drop network. A campus LAN has a single-mode, dual fiber link between two copper Gigabit switches using Gigabit media converters. The fiber link connects the Corporate Offices to the Manufacturing Plant, as shown in Figure 1.

The existing Gigabit fiber is currently at capacity, and due to company growth, there is a need to double the data capacity to the Manufacturing Building (adding another Gigabit Ethernet connection). In addition, a New Call Center has been added that requires T3 connectivity to a PBX system. 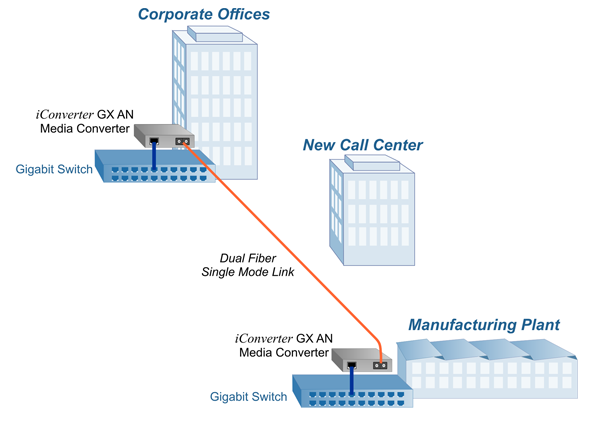 To support the new requirements, the existing fiber is used to create a Coarse Wavelength Division Multiplexing (CWDM) network as shown in Figure 2. In the figure, each color represents a specific CWDM wavelength.

Two UTP Gigabit ports from the Gigabit switch at the Corporate Office are converted to fiber using iConverter GX AN media converters equipped with CWDM SFPs with two unique CWDM wavelengths, λ1 and λ2. Both media converters are installed in a high-density iConverter 19-Module Chassis in order to save rack space, power and cost. 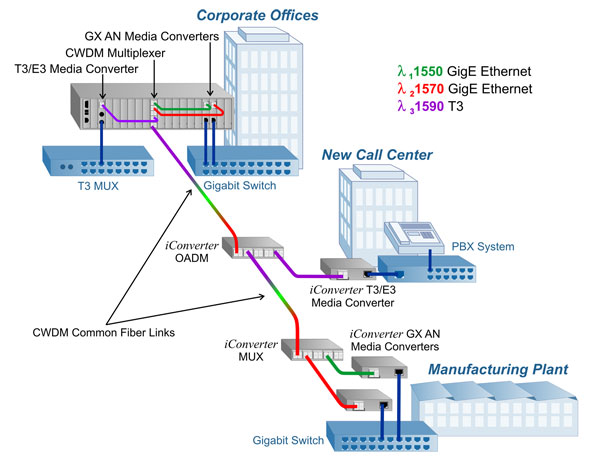 To connect the T3 circuit between the Corporate Offices and the New Call Center, the copper connection (coax) is converted via an iConverter T3/E3 media converter with a CWDM SFP to another unique optical wavelength (λ3).

All three wavelengths are connected with fiber jumpers to an iConverter 4-channel CWDM MUX module that is mounted in the same high-density chassis with the media converters. The CWDM MUX combines all the wavelengths and sends them on a CWDM common link (the original single-mode dual fiber link).

At the New Call Center building, an iConverter Optical Add+Drop Multiplexer, or OADM is used to filter out the λ3 wavelength carrying the T3 service from the CWDM common link. A standalone iConverter T3/E3 media converter with a CWDM SFP is used to convert the signal from optical back to its native coax interface. The remaining wavelengths λ1 and λ2 continue to the Manufacturing Plant.

This application demonstrates how CWDM multiplexers and OADMs can be used to add new data channels to existing fiber infrastructure in a simple and cost-effective manner. Three channels are multiplexed over the fiber links, and the four-port MUX in this application has an unused channel port for future growth.

Learn more about CWDM Multiplexing at the CWDM Resource Center